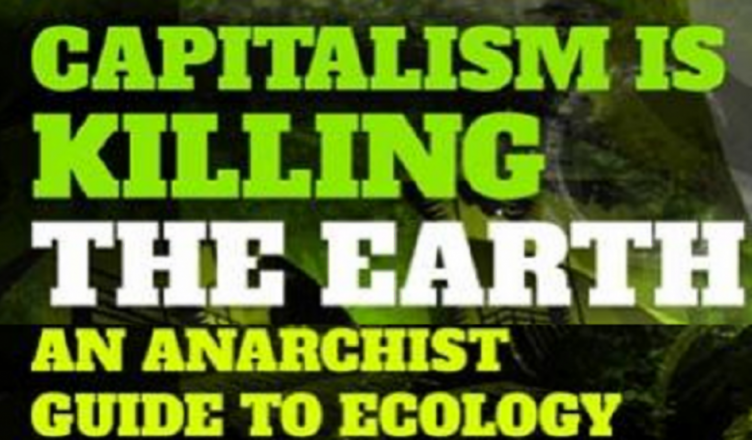 Capitalism Is Killing The Earth: An Anarchist Guide To Ecology. Anarchist Federation. 40 pages. £3.00

This pamphlet from the Anarchist Federation is a well articulated and well written argument for the intrinsic link between climate change and ecological devastation and capitalism. As the pamphlet states: “Capitalism is a system reliant on the total exploitation of nature; whether that be sacrificing our clean water to frack for hydrocarbons or sacrificing our children for the production line.” It goes on to say that the market cannot be relied on to fix C02 emissions and that the only way to achieve meaningful change is to abandon the capitalist model.

The pamphlet is divided into chapters looking at the following subjects: Climate change under capitalism; Case Studies : energy and housing under capitalism; False solutions; an anarchist ecology; and How Do We Get there?

It addresses the question of zero carbon homes and the fact that energy efficiency in housing under capitalism is not seen as a priority when so many people face homelessness and poor housing conditions. It also correctly highlights the factor of land ownership and soil exhaustion under the market, the most obvious example being the cutting back of the rain forests but also the less obvious. It concludes this section by stating: “We can manage limited resources effectively but only through production for need rather than profit, as well as a return to the commons and the creation of a truly circular economy” (i.e. one where the waste of one product is used as the input for the next).

It argues strongly against false solutions like climate summits and national carbon budgets, carbon trading and carbon capture, green and ethical capitalism, state control, the divestment movement, primitivism and its opposite the use of technology to solve ecological problems, and population control.

The pamphlet argues strongly against productivism, that is, the advocacy of production for production’s sake under capitalism. It contrasts this with “a shift in focus to production for societal need and products that can be repaired and maintained” and the ending of entire sectors of the economy like advertising and the military industrial complex.

As it says “the environmental crisis cannot wait for a revolution to destroy capitalism, nor will a post-revolutionary society be environmentally sound unless we manage to change the relationship between humans and the rest of nature”. It offers several short term aims. One, that the link between capitalism and environmental degradation should be made explicit with a critique of the role of the State in facilitating this. Two, that anarchists need to get involved in the mass climate movements to shift the aims of these movements away from false solutions mentioned above.  Three, to get trade unions to adopt an environmental approach. Four, linking up of different struggles, with as an example, land justice campaigns having a clear link to climate change as landowners decide how land is used etc. Also rising nationalism as the State’s response to climate refugees. Five, the creation of networks of likeminded people, closer work with groups such as Earth First! Reclaim The Power and Rising Tide. Six, Actions and struggles independent of actions of politicians and NGOs.

A few criticisms of the pamphlet. Whilst car ownership is touched upon lightly, there is no deep analysis of the car culture and the effects of the internal combustion engine and linked to this the need for the increase in public transport systems and indeed for FREE public transport. In fact, campaigns against fare rises on public transport and from there the demand for free public transport and for its extension should be an essential part of the struggle against climate change.

Secondly, we find it a little strange that in the section How Do We Get There? There is talk of pushing “our unions to adopt an eco-syndicalist stance”. This seems at odds with the AF’s Aims and Principle which offers a correct critique of trade unionism. This sentence seems to imply that somehow the trade unions can be converted into fighting syndicalist organisations, something that should be seen as an illusion.

Despite these criticisms, the pamphlet is important in its linking of climate change to capitalism and deserves to be widely read and widely distributed.

One thought on “Capitalism Is Killing The Earth: An Anarchist Guide To Ecology. Anarchist Federation.”