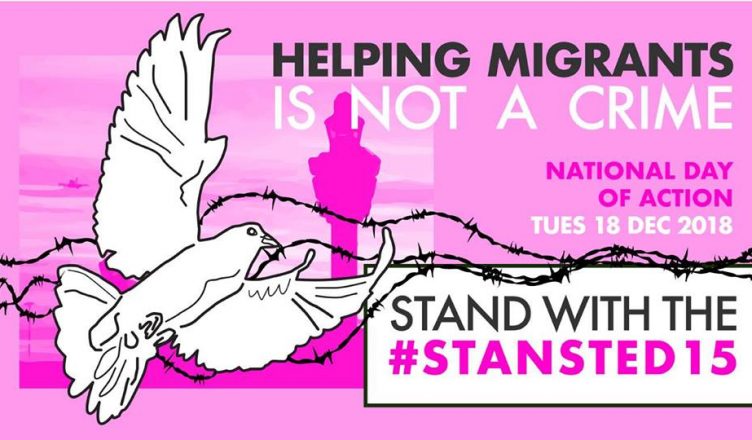 Call out to support the Stansted 15 for Tuesday 18th December

Actions listed in towns and cities across the country

We repeat the callout, launched by Liverpool Migrants Solidarity Network, set to coincide with International Migrants Day 18/12/18. They say:

For International Migrants Day on Tuesday 18 December, activists from all over the UK will stand in solidarity with the Stansted 15, a group of people who stopped a secret charter flight from deporting precarious migrants to destitution, persecution, and death. On Monday 10 December, the Stansted 15 were found guilty of terror-related charges. Amnesty International called the verdict a crushing blow for human rights. We are using this day to raise awareness of the plight of the Stansted 15 in addition to local migrant-rights issues in every city participating in this national day of action.

We believe that this draconian ruling was designed to thwart direct action against the UK government’s brutal and violent treatment of migrants. This country’s racist and xenophobic immigration policy is rooted in its colonial history. This history continues with the mistreatment and exploitation of migrants in detention, a regime of sexual and physical violence that has resulted in over 43 migrant deaths inside ten immigration removal centres since 2000. Even when not detained, borders cross the everyday lives of all migrants, especially asylum seekers who live in enforced poverty, forbidden to work and housed in appalling privately-run accommodation. State hostility is further embedded in schools, universities, the NHS, charities and housing authorities, with employees conscripted to become border guards, making precarious the lives of so many non-EU and EU migrants and those who were born in the UK but were unable to regularise their status because of opaque immigration rules and high visa fees. The violent coloniality of the hostile environment was exposed this year by the horrible treatment of the Windrush generation, many of whom were brought to the UK to help rebuild the national economy after World War II, raising children that were born in the UK. After living in the UK for their entire lifetimes, members of these communities have found themselves cruelly detained and deported, without the ability to contest their cases.

On Tuesday 18 December, we will use our collective voices to stand in solidarity with the Stansted 15 and with all migrants, such as the women detainees in Yarl’s Wood who continue to #HungerForFreedom.

To support the Stansted 15 and End Deportations we urge people to wear and/or make signs in pink in solidarity. The following cities have local actions planned. Please click on the link of your city to find out how you can get involved:

Not on the list, but want to plan an action in your city? Contact Unis Resist Border Controls and get involved!