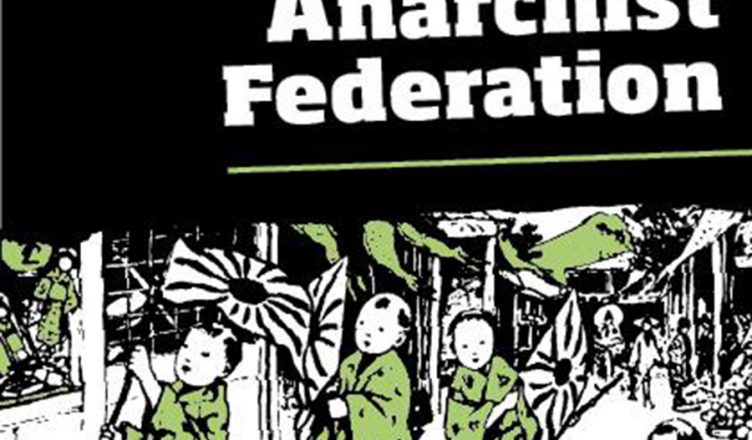 Get a free PDF download of the ace pamphlet Against Nationalism published by the Anarchist Federation.

Here’s the introduction from the pamphlet:

Preface
This pamphlet has its origins in a particular time and place, with the impetus behind it coming from the Israeli state’s military campaign in the Gaza strip in late 2008 and early 2009. As the record of atrocities and the death toll mounted, coming to a final stop at around 1,500 dead, large protests took place around the world, with a significant protest movement developing in Britain. This movement took the form of regular street protests in cities, a wave of 28 university occupations around the country and occasional attacks against companies supposedly implicated in the war. There were also, depressingly, actions with clear anti-Semitic overtones.

Anarchist Federation members were involved in a range of ways, being present on street demonstrations and involved in a number of occupations. As anarchists, we are opposed to war, militarism and imperialism, and see a powerful movement against these forces as a vital part of internationalism in action and the process of building the confidence necessary for a social movement against the state and capitalism.

However, we were unimpressed by the way in which support for the ‘Palestinian resistance’ – in other words Hamas, Islamic Jihad, Al-Aqsa Martyrs brigade and the other proto-state forces in the region – became mixed in with the legitimate revulsion felt as the bombs and shells fell onto the heads of ordinary Gazans. These groups – which called on ordinary Palestinians to ‘martyr’ themselves for the nation – have a clear history of repressing workers’ struggles at gunpoint, oppressing women, gays and lesbians, and spreading the virulently reactionary doctrines of nationalism and Islamism.

As the war ground on, they showed their true colours by attempting to indiscriminately kill Israelis, settling scores with their rivals through summary executions, and making political capital out of refugees by preventing them from accessing medical aid over the border. As ordinary Palestinians fled in droves, ignoring the calls from militant groups and their Western cheerleaders to throw themselves upon the pyre and join the ‘resistance’, the true face of that ‘resistance’ became apparent.

As anarchist communists, we have always opposed nationalism, and have always marked our distance from the left through vocally opposing all nationalism – including that of ‘oppressed nations’. While we oppose oppression, exploitation and dispossession on national grounds, and oppose imperialism and imperialist warfare, we refuse to fall into the trap so common on the left of identifying with the underdog side and glorifying ‘the resistance’ – however ‘critically’ – which is readily observable within Leninist/Trotskyist circles. We took this stance on Northern Ireland in the past, and take it on Israel/Palestine today.

Therefore, in order to give context to the text that follows and show our analysis in a practical context, we reproduce as appendices two texts which AF groups circulated as leaflets during the campaign, and which were utilised by other anarchist comrades in the UK, such as locals of the anarcho-syndicalist Solidarity Federation and Organise! in Northern Ireland. We hope that this text will circulate as widely as our original leaflets did, which were translated into Spanish and Polish and reproduced as far away as Central America, and open debate within the wider anti-state communist movement

The full text is also available on Libcom.org.

Against Nationalism on Libcom.org